The World of Adventure: Famous Skydivers to start following Skydiving gives you a thrill quite unlike another. It’s a feeling of leaving inhibitions behind. Honestly, while you’re falling from that height, being scared is not even an option!

So if you’re looking to try this thrilling sport, or become an expert at it, here are 5 famous Skydivers you should be following RIGHT NOW!

In July 2016, Luke Aikins set the record for being the first diver to jump without a parachute or wingsuit- and he lived! In this stunt called ‘Heaven Sent’, Luke flipped on to his back, at literally the last second, and landed effortlessly on the safety net.

To keep track of his fun skydiving feats, check out his profile! He leaped into fame (Excuse, please), after jumping from structures like the Eiffel Tower and Brazil’s Christ Redeemer. In 2013, he did a jump called the ‘dagger’, as part of which, he jumped out of a helicopter and wearing a wingsuit, flew through a tiny crack in Mount Jianglang in China. This passage was only about 15 feet wide. He was even the first person to fly through a waterfall!

Stay updated with this hardcore stuntman 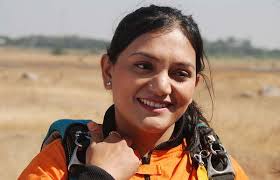 We could go on about this, but you get the drift.

In 2012, Felix achieved the record of the first person to break the sound barrier, without using vehicular power, during his descent. In his most recent project, Red Bull Stratos, he jumped to earth from the Stratosphere, off a helium balloon!

To keep up with his badassery, see what he has to say.

Yup, the man celebrated his 50th Birthday in 2006 by jumping 640 times in 24 hours! We can’t even imagine how that’s possible, so we’ll leave the math to you.

Do not forget to check out our post on Sajid Chougle, a professional Skydiver and Base Jumper from India.

While you’re at it, read about some of the unbelievable World Records in Adventure Sports.

PrevPrevious PostScuba Diving and Employee Performance: Gift your team a Dive Trip
Next PostThe perfect getaway for your team: Resorts near MumbaiNext